In Memory of
Joseph W.
Marek
1929 - 2020
Click above to light a memorial candle.
Memorial Candle Tribute From
Solfanelli-Fiorillo Funeral Home Inc.
"We are honored to provide this Book of Memories to the family."
View full message >>>
Send Flowers
Plant a Tree In Memory of Your Loved One
Click Here
Menu 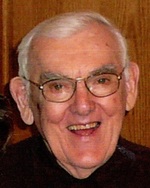 Joseph W. Marek, “Figi” of the Tripp Park section of Scranton passed away Saturday at the Gino Merli Veterans’ Center following an illness. His wife the former Dolores Pelucacci died March 21, 2009.
Born in Olyphant, he was the son of the late Walter and Mary Pasko Marek. He was a graduate of Olyphant High School.
Joseph proudly served his country in the United States Army.
He worked for many years at Wilson Foods and prior to his retirement was employed by the Lackawanna County Housing Authority.
A very devout Catholic, he was a member of Mary, Mother of God Parish, and a former longtime member of St. Vincent de Paul Church until its closing.
Surviving is his daughter, Pam Marek of Scranton; a sister, Geraldine Marek, Olyphant; two brothers, Walter, and his wife Patricia, Archbald; and Francis Marek, Olyphant; several nieces and nephews.
He was preceded in death by his siblings, Irene Fuardo, Maxine Kobierecki, Emilia Stoshak, and Florence Cruciani.
The family would like to express their sincere gratitude to the staff and his “special angels” at Gino Merli for their compassionate care. May God continue to bless them.
Funeral services will be conducted on Wednesday with Mass of Christian Burial at 10:00 a.m. in Mary, Mother of God Parish at Holy Rosary Church, 316 William St. Interment with military honors will follow at Cathedral Cemetery. All CDC guidelines of social distancing and face covering will be observed. The family understands some may be uncomfortable attending the services due to the pandemic, please say a prayer for Joseph instead.
In lieu of flowers, memorial contributions may be made to Mary Mother of God Parish, 316 William St. Scranton, Pa. 18508.
Funeral arrangements are under the care and direction of the Solfanelli-Fiorillo Funeral Home Inc., 1030 N. Main Ave.