In Memory of
Edward K. "Whitey"
Weidow
1930 - 2020
Click above to light a memorial candle.
Memorial Candle Tribute From
Solfanelli-Fiorillo Funeral Home Inc.
"We are honored to provide this Book of Memories to the family."
View full message >>>
Send Flowers
Plant a Tree In Memory of Your Loved One
Click Here
Menu 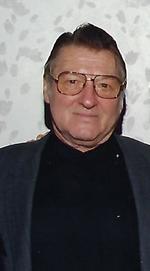 Edward K. “Whitey” Weidow, 89, of Dunmore passed away Tuesday April 7 at home. His wife is the former Mary M. Smith.
Born in Philadelphia, he was the son of the late Joseph and Barbara Kaub Weidow. He was educated in Scranton Schools and proudly serviced in the United States Army. He was a member of The Church of Jesus Christ of Latter-Day Saints.
Prior to his retirement he was employed by Diamond-K, after his retirement he enjoyed spending time at his favorite nephew’s, Sputty’s Garage.
Whitey as he was affectionately known by all, had a love for antique cars, NASCR, and the Pittsburg Steelers, and he loved his dog, Boo. He had a heart of gold and helped anyone in need. He was loved and will be missed by all.
The family would like to thank his niece Barbara Weidow for her loving care over the last three years.
Also surviving are his children, Joanne DiRienzo and husband Frank, Edward J. Weidow, Cheryl Weidow, David Weidow, Robert Weidow and wife Theresa; fifteen grandchildren, several great grandchildren; nieces and nephews.
He was preceded in death by a daughter in-law, Shirley Weidow; Brothers, Joseph, George, and Carl Weidow; sister, Lucille Siebecker.
Due to the present Pandemic we are experiencing and in consideration of everyone’s health, the family will have a private funeral service.
Memorial contributions may be made to the Griffin Pond Animal Shelter, 967 Griffin Pond Rd. South Abington Township, Pa. 18411.
Funeral Arrangement entrusted to the Solfanelli-Fiorillo Funeral Home Inc., 1030 N. Main Ave.