In Memory of
Ralph W.
Genello
1941 - 2020
Click above to light a memorial candle.
Memorial Candle Tribute From
Solfanelli-Fiorillo Funeral Home Inc.
"We are honored to provide this Book of Memories to the family."
View full message >>>
Send Flowers
Plant a Tree In Memory of Your Loved One
Click Here
Menu 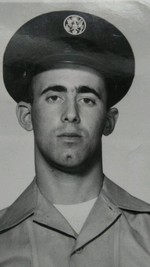 Ralph W Genello of Scranton formerly from Dunmore passed away peacefully after a brief illness on March 23 at Geisinger Community Medical Center. Ralph was preceded in death by his wife in 2007 the former Dora Pacini.
Born in Scranton on March 13, 1941 to the late Vito Genello and Marie Ambrosini Lutz he was educated in Dunmore Schools. Following graduation from Dunmore High School in 1958 Ralph entered the Air Force and was honorably discharged in 1963.
Ralph worked many years in shipping and receiving for Sears Department store prior to his retirement. He was of the protestant faith and attended the Green Ridge Assembly of God Church. After checking in every morning with his best buddy and grandson Angelo and making sure the neighborhood cat got a treat and rub behind the ears, Ralph started his day off with meeting his friends for a coffee at Chick’s Diner and then it was off to Mount Airy or the Mohegan Sun for the day. Ralph had a wonderful personality and made many special friends over the years. After a day at the casino he would come home and turn on Fox news or CNN and discuss world events with his sister Marie. He was a caring and giving man who never had a bad word to say about anyone. He enjoyed watching sports and playing the lottery and even had a few big wins over the years.
The family would like to thank Dr. Barry Minora and his staff for the care they provided to Ralph over the years and to the staff of the ICU department at GCMC for the care and compassion that was given to Ralph over the past few weeks.
Surviving are his sister Marie Thomas with whom he resided, his brothers David Lutz and wife Renee, Dunmore, Edward Lutz and companion Patty Hill, Clearwater, FL, George Lutz and wife Barbara, Scranton, Stepson Richard Rescigno, Scranton, Grandchildren Angelo Rescigno of Archbald, Jonathan Kreidler of Tarpon Springs FL, Kelly Rudalavage of Scranton, Adrian Rescigno of Mayfield and Richard Rescigno of Scranton. Great-grand children, Angelo, Samantha and Valya Rescigno, Brianna Rudalavage, Peyton Rescigno, Sophie Rescigno, Kinnah, Kailee and Julianna Kreidler.
many nieces, nephews and cousins that he was close to and who will miss him dearly especially his cousins Paul Genello, Stephen Genello, Barbara Leone and Robert Genello and their families. And last but not least his friend Greg Slack, who checked in with him everyday and all his friends at Chick’s Diner, Mount Airy and The Mohegan Sun. Ralph was also preceded in death by several brothers and sisters in law.
Keeping everyone’s health and safety in mind there will be no public viewing at this time. The family will be holding a memorial service for Ralph that will be announced at a later time.
Arrangements and cremation are under the care and direction of the Solfanelli-Fiorillo Funeral Home Inc., 1030 N. Main Ave. Scranton.