In Memory of
Kathleen "Niner"
Barber
1922 - 2020
Click above to light a memorial candle.
Memorial Candle Tribute From
Solfanelli-Fiorillo Funeral Home Inc.
"We are honored to provide this Book of Memories to the family."
View full message >>>
Send Flowers
Plant a Tree In Memory of Your Loved One
Click Here
Menu 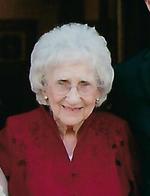 Kathleen “Niner” Barber, 97, of the Weston Field Section of Scranton passed away Friday at Moses Taylor Hospital Following an illness. She was the widow of Eugene Barber who died in 1996.
Born in Scranton, she was the daughter of the late Patrick and Catherine Grossman Ferguson.
Prior to her retirement she was employed by the Scranton Lace Works Co. for many years, a job she truly enjoyed and often referred to her fellow workers as her second family.
A wonderful life has come to an end, she loved and lived among family and friends.
Kathleen enjoyed her sports especially cheering for the Boston Red Sox and the Celtics. She was active in the Central City Little League, St. Vincent de Paul Church where she was a member until its closing, currently a member of St. Peter’s Cathedral, she also served as a Den Mother at St. Vincent’s.
Surviving are two sons, John Barber and wife Margaret Ann, Old Forge, Thomas Barber and wife Betty Ann, Madisonville; a daughter, Nancy Schipper and husband Robert, Woodstock, Ga.; a daughter in-law, Diane Beckage Barber, Dickson City; five grandchildren, John David, Katelyn, Sean, Ryan, and Shannon; a great grandchild, Elliott; a brother, Robert Ferguson and wife Patricia, Florida; several nieces and nephews.
She was preceded in death by a son, Joseph Barber; five sisters, Mary, Margaret, Alice, Helen, and Florence; a brother, Patrick.
Considering the current health situation funeral services will be private and held at the convenience of the family. A Mass will be celebrated at a later date. Interment Cathedral Cemetery.
Arrangement have been entrusted and are under the care of the Solfanelli-Fiorillo Funeral Home Inc., 1030 N. Main Ave.