In Memory of
Albert J.
Treski
1930 - 2019
Click above to light a memorial candle.
Memorial Candle Tribute From
Solfanelli-Fiorillo Funeral Home Inc.
"We are honored to provide this Book of Memories to the family."
View full message >>>
Send Flowers
Plant a Tree In Memory of Your Loved One
Click Here
Menu 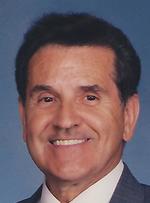 Albert J. Treski, 88, of Moosic died Wednesday January 30, 2019 at home. His wife of 52 years, the former Antoinette M. Baldassari, preceded him in death on September 17, 2004.
Born in the Providence section of Scranton, he was the son of the late George and Genevieve Janczewski Treski.
He was a 1948 graduate of Scranton Technical High School and earned a Bachelor of Science Degree, majoring in Economics from the University of Scranton.
He was a veteran of the Korean War serving with the United State Air Force as a Staff Sergeant with the 2143rd Air Weather Wing, Tokyo, Japan. Among his decorations were the Korean Service Medal, United Nations Service Medal, National Defense Service Medal and the Good Conduct Medal.
Prior to retirement in 1986, he was employed by the Federal Government for over 30 years at the Tobyhanna Army Depot as a budget systems analyst.
He was a member of St. Ann’s Basilica Parish in Scranton, and was formerly a member of St. Anthony of Padua Church Parish in North Scranton until its closing. He was an avid New York Yankees fan and a Philadelphia Eagles fan.
Surviving are a daughter, Carol A. Treski, at home; son Attorney Alan R. Treski and wife Dr. Amy A. Treski, Bensalem; granddaughter Heather and grandson Tyler, both of Bensalem; several nieces, nephews, grandnieces and grandnephews and a step-grandnephew.
He was preceded in death by brothers Bernard P. Treski and Gerald P. Treski; sister Joan Treski Myers-Mitchell; nephew Larry Treski; niece Theresa Treski McDermott Brust.
The funeral will be conducted Saturday from the Solfanelli-Fiorillo Funeral Home Inc., 1030 N. Main Ave. with Mass of Christian Burial at 10:00 am in St. Ann’s Basilica, 1250 St. Ann’s St. Interment with Military Honors will follow in Cathedral Cemetery. Friends and family may call Friday from 5:00 to 8:00 p.m.