In Memory of
Robert
Wehrmann
1945 - 2018
Click above to light a memorial candle.
Memorial Candle Tribute From
Solfanelli-Fiorillo Funeral Home Inc.
"We are honored to provide this Book of Memories to the family."
View full message >>>
Send Flowers
Plant a Tree In Memory of Your Loved One
Click Here
Menu 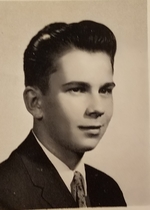 Robert F. Wehrmann of Scranton died Tuesday June 5, 2018 at the Allied Hospice Inpatient Unit. He was preceded in death by his wife, the former Maureen Brown Wehrmann who died on April 27, 2016.
Born in Clifton, New Jersey he was the son of the late Heinz and Margaret Bowen Wehrmann.
He was a 1963 graduate of Clifton High School in N.J. and prior to his retirement he worked as a self-employed contractor and most recently as a printing press operator at I.C.S. in Scranton.

Surviving are children, Deborah Ritter and husband Daniel, Mt. Cobb, Margaret “Peggy” Wehrmann, Scranton, Karen Martin and husband Steve, Honesdale, John Wehrmann and wife Katrina, Moscow, Ken Wehrmann and wife Paula, Honesdale, David Wehrmann, Scranton, and Zachary Wehrmann, Scranton; 9 grandchildren; one great grandchild.
He was preceded in death by brother William Wehrmann; sister Ruthann Dudas.
Funeral services and interment will be private at the convenience of the family. Memorial contributions in Robert’s memory can be made to St. Joseph’s Center 21010 Adams Ave. Scranton, PA 18509.
Arrangements have been entrusted and are under the care of the Solfanelli-Fiorillo Funeral Home Inc., 1030 North Main Ave.